Royal Palace of Turin: Overall elevated view, looking down the square at the facade 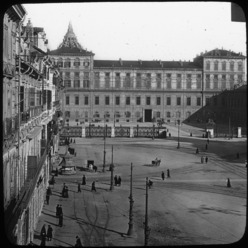 The top of the spire (dome) of the Chapel of the Holy Shroud is visible on the left, behind the palace.

The royal palace of the House of Savoy. The site was once part of an old Bishops palace in the center of the new capital of Savoy, Turin. It was modernized greatly by the French born “Madama Reale” Christine Marie of France (1606-1663) in the seventeenth century. The main facade dates from 1646-1660. The complex includes the Palazzo Chiablese. The Chapel of the Holy Shroud, the current resting place of the Shroud of Turin, was added to the structure in 1668-1694; built in the west wing of the palace, it joins the apse of the cathedral of St. John the Baptist (Turin Cathedral).