Sequential Divergence and the Multiplicative Origin of Community Diversity 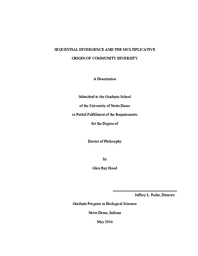 The field of evolutionary ecology has focused on understanding two important aspects regarding the origin of species: (1) the ecological adaption of organisms to different environments, and (2) the co-evolutionary interplay between organisms themselves. In this regard, a long standing, but understudied hypothesis that unifies these considerations is “biodiversity begets biodiversity” in a process referred to as “sequential divergence”. Specifically, sequential divergence contends that as species diverge, they create new niches for other organisms to adapt to. As a result, the divergence of one species could lead to the genesis of many new taxa. Here, to understand how common sequential divergence may be in nature, I test for a multiplicative effect of the process within a single system consisting of three parasitoid wasps, Diachasma alloeum, Utetes canaliculatus and Diachasmimorpha mellea (Hymenoptera: Braconidae), that attack Rhagoletis pomonella fruit flies (Diptera: Tephritidae).

Using genetic tools, behavioral studies, and life history analyses, I show that the same host-related ecological selection pressures that differentially adapt and reproductively isolate Rhagoletis to their respective host plants (the timing of adult eclosion and host fruit odor preference) cascaded across trophic levels and induce host-associated genetic divergence for each of the three members of the parasitoid community. In addition interspecific competition between wasp species for limited resource during larval development inside fly hosts is mitigated by their temporal subdivision of the shared host fly resource. As a result, the seasonal subdivision of fly resources is accentuating allochronic isolation among conspecific wasps attacking different host flies, generating increased reproductive isolation and contributing to their ongoing divergence.

Furthermore, the role of temporal resource partitioning does not appear to be isolated to Rhagoletis-attacking parasitoids. Results from a meta-analysis of 64 studies suggests that species differences in the timing of a key life cycle event, oviposition, into shared insect hosts may be an important life history strategy mediating competition between parasitoid species in general and allowing for multiple taxa to co-exist on shared hosts. In turn, his process could play a critical role in structuring insect communities and contributing to the incredible diversity of parasitoid species observed in nature.

Overall, my findings support the claim that “biodiversity begets biodiversity” and suggest that the process may be more common in nature that previously thought. Divergent selection at lower trophic levels has the potential to not only linearly, but multiplicatively amplify biodiversity at higher levels. In addition, sequential divergence may be accentuated by other types of species interactions (i.e., interspecific competition) to help facilitate the process and promote species coexistence. For smaller organisms like parasitoids that can partition and experience resources on a fine scale cascade, sequential divergence could be a major force contributing to the formation of new biodiversity.