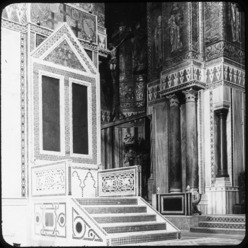 This does not seem to line up with current images of the church, which is quite plain.

To accommodate the thousands of pilgrims who arrived annually in the Crusader period many new churches and buildings were built, including the church of St. Anne (1140; restored 19th century). It was erected over the traditional site of the birthplace of Anne (Hannah), the mother of Mary and completed in 1138 by Arda, widow of Baldwin I, the first titled king of Jerusalem. It stands near the beginning of the Via Dolorosa. In 1192, Saladin turned the church into a Muslim theological school, which is commemorated in an inscription above the church’s entrance. Eventually abandoned, the church fell into ruin until the Ottomans donated it to France in 1856. It was subsequently restored, but most of what remains today is original. It is Roman Catholic and controlled by the French Government and the White Fathers.