Development and Applications of Quantum to Molecular Mechanics (Q2MM) 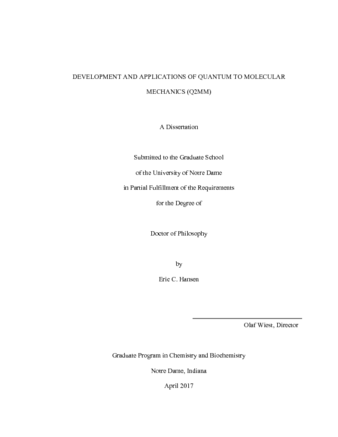 Asymmetric synthesis is a major focus in modern organic chemistry. Experimentally screening for selective ligands is a cumbersome process, and provides only indirect insight into the molecular origin of selectivity. Transition state force fields generated by the Quantum to Molecular Mechanics (Q2MM) method can describe the stereoselecting transition states involved in reactions of interest to synthetic chemistry with the accuracy of electronic structure methods but the speed of force field calculations. This can provide structural and mechanistic rationales for experimental observations and make quantitative predictions before experimental ligand screening. This thesis presents a robust code for performing Q2MM parameterization of ground state and transition state force fields and improvements to Q2MM. An automated virtual screening program is developed, which works alongside Q2MM to rapidly perform virtual screens of ligands in asymmetric catalysis. The capabilities of Q2MM are demonstrated in a study of the conformations of sulfones and sulfonamides, which were investigated using high level electronic structure methods. They revealed a dual anomeric effect, and the robustness of the Q2MM method was demonstrated by parameterizing a force field that implicitly captured these complicated electronic effects. Lastly, the mechanism and structural origin of an unexpected stereoselection observed in the rhodium catalyzed hydrogenation of cyclic dehydrooligopeptides was studied using Q2MM.