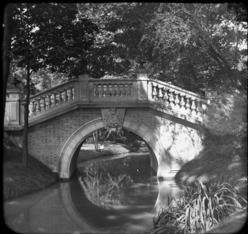 At the main entrance (Boulevard de Courcelles) is a rotunda, built by Claude Nicolas Ledoux after the French Revolution. The park covers an area of 8.2 hectares (20.3 acres). The park was established by Phillippe d'Orléans, Duke of Chartres (1747-1793) who began buying land in 1769. He favored the informal English garden style, although the park contains several garden follies, some of which are masonic references. He employed Carmontelle who was less impressed by the “jardin anglais” and so worked in a variety of styles within the park. Half of the park land was lost to development, but Baron Haussmann saved the other half which was re-inaugurated by Napoleon III on 13 August 1861.