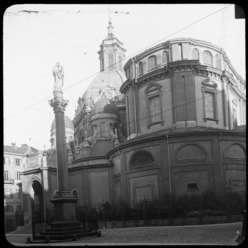 The column on the corner of Via della Consolata dates from 1835, erected in memory of the cholera epidemic which raged in the city.

The basilica stands on the ruins of one of the corner towers of the ancient Roman city walls (Julia Augusta Taurinorum). The current Baroque church is the result of the radical reworking of the former Romanesque church of Sant'Andrea on the site. The only Romanesque structure left is the bell tower. The Baroque phase was begun in 1678 by Guarino Guarini. The rebuilding was completed in 1703, under the direction of the military architect Antonio Bertola. Juvarra and Carlo Ceppi contributed to the transformation of the sanctuary, ca. 1729. An icon of the Madonna is housed in the crypt.