Church of San Gil: Retablo of the Chapel of the Nativity of Mary flanked by founders tombs 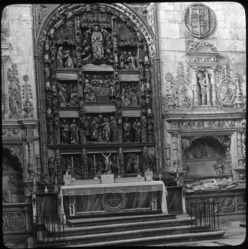 S Gil is noted for its octagonal, star-vaulted chapel of the Nativity of Mary by Felipe Vigarny and Diego de Siloé (both sculptors and architects). In 1486 the chancel was lengthened and rebuilt, which was followed by the opening of chapels of several wealthy families. The Chapel of the Nativity of Mary contains an altarpiece (retablo), late Gothic Plateresque in style, with twelve narrative scenes. The altar is flanked by the tombs of the founders, John and Ines de Castro Lerma, both deceased in 1548, and his parents, John and Teresa Garcia de Castro Mugica. These are Mannerist in style.