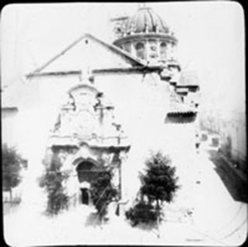 Granada Cathedral is a Roman Catholic church in the city of Granada, Spain. Construction was not begun until the sixteenth century, after acquisition of the Nasrid kingdom of Granada from its Muslim rulers in 1492. While its earliest plans had Gothic designs, most of the church’s construction occurred when the Spanish Renaissance style was supplanting the Gothic in Spanish architecture.