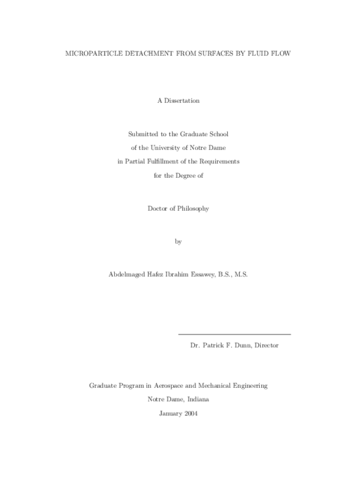 This work presents a combined experimental and theoretical investigation of the conditions under which a fluid flow causes a microparticle to detach from a flat surface. The general approach was to conduct well-controlled experiments, to observe individual microparticle motion and to focus on the basic detachment mechanisms. Microparticles of different sizes, materials and shapes (mostly microspheres) were deposited as monolayers onto the substrates under controlled conditions. The microparticles attached to the substrate in a condition of static equilibrium due to contact adhesion and resided completely within the viscous sublayer. The flow was accelerated during a transient period up to a fixed, constant velocity. Smooth glass plates were used as substrates and scanned with an atomic force microscope to determine their roughness-height distributions. The study was confined to microparticles in the diameter range of approximately 10 to 100 micrometers. They were distributed on the surface as a monolayer in sparse/dense conditions, dry/humid and subjected to laminar or fully developed turbulent flows.

Quantitative information on the increase of flow velocity at which 50 % of the microparticles detached (Uth) at different controlled conditions are presented. The variability in the Uth was found to be in the range of 10 % to 20 %. The techniques used to obtain such a low variability are described. The measured values then were compared to a model based on force/moment balance approach. The model accounts for the surface roughness effects and is applicable to dry/humid conditions and laminar or fully developed turbulent flows. The results of the model agreed with the measurements, to within the uncertainties, for the cases studied. The sensitivity of the U_th to five factors contained in the experiments and the model is analyzed. The motion of microparticles after their detachment is considered. The microparticle velocities along the surface after detachment are measured using a strobed laser-light sheet and compared to the numerical solutions. Results indicate that the microparticles undergo pure rolling along the surface before possible entrainment, that the sweep part of a burst-sweep event plays a role in the detachment process and that the dissipative forces and moments are negligible.