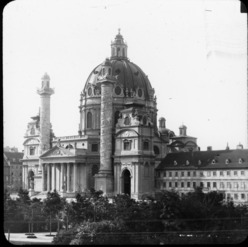 Fischer’s masterpiece was the Karlskirche in Vienna (begun 1715). This unparalleled work was full of iconographical significance for Emperor Charles VI, whose votive church it was. Thus, for example, the great Trajanic columns flanking the entrance bear reliefs depicting scenes from the life of St Carlo Borromeo, to whom the church is dedicated (after the plague of 1713), the themes of which are Constancy and Fortitude. The columns also symbolize both the Pillars of Hercules (i.e. the Straits of Gibraltar), suggesting the history of the empire and Charles VI’s claim to the throne of Spain; and the two pillars in the porch of the Temple of Solomon in Jerusalem, Jachin and Boaz (which may also mean Constancy and Fortitude), thus presenting Charles VI as the new Solomon, following through Fischer’s derivation of architecture from Jerusalem in his Entwurff einer historischen Architektur. The dome is in the form of an elongated ellipsoid.