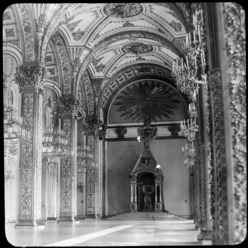 Aleksandrovsky Hall and Andreyevsky Hall were combined in Soviet times to be used for meetings and conferences of the Supreme Soviet of the USSR; they were lavishly restored in accordance with Thon’s designs in the 1990s.

The Grand Kremlin Palace was formerly the tsar’s Moscow residence. Its construction involved the demolition of the previous Baroque palace on the site, designed by Rastrelli. It has a total area of about 25,000 square meters. It includes the earlier Terem Palace, nine churches from the 14th, 16th, and 17th centuries, the Holy Vestibule, and over 700 rooms. Its five reception halls (Georgievsky, Vladimirsky, Aleksandrovsky, Andreyevsky, and Ekaterinsky) are named for orders of the Russian Empire: the Orders of St. George, Vladimir, Alexander, Andrew, and Catherine.