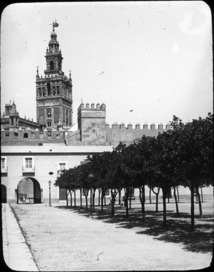 La Giralda is the city’s most famous symbol. Its square base is 13.61 metres and a height of 105 metres. It was built as a minaret of the old mosque, although the bell tower and spire top is Renaissance (1568). The name comes from the statue of Faith (a weathervane) which tops the spire. It is one of three remaining Almohad minarets in the world.