Dynamics of Settlement Failure and Litigation in Interstate Territorial Disputes 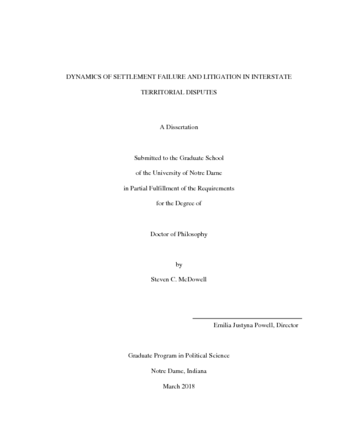 When do states litigate their territorial disputes? Existing studies of the selection of litigation as a peaceful settlement method generally emphasize broad, macro-level factors like democracy or relative power levels that often remain stable throughout a territorial claim. This means that current theories of litigation in territorial disputes provide relatively little information regarding when litigation is likely to occur, especially when a dispute lies dormant for an extended period of time. To remedy these shortcomings, I propose a theory of the timing of litigation in territorial disputes that focuses on the events that determine the “ripeness” of a dispute for the use of legal settlement methods. Settlement failure, defined as the failure of nonbinding settlement methods to resolve a dispute, provides states with information regarding the existence of bargaining deadlock. Delegating a dispute to a third party is always risky and uncertain, but when the evidence for an impasse is compelling, adjudication and arbitration become attractive for breaking the deadlock and ending the costs associated with maintaining a dispute. Instead of facilitating bargaining, the new information provided by settlement failure encourages delegation.

To complicate matters, the effects of settlement failure vary across disputes and disputants. Economic opportunity costs, broad interests, and legalization accelerate the “path” to litigation in offshore island disputes. Legal factors also alter the calculus of settlement failure. Clear legal arguments create a legal focal point that allows states to coordinate policy around litigation. This decreases the amount of settlement failure needed to make litigation proposals likely. Finally, states that have won court cases in the past are much quicker to suggest litigation during negotiations. This dynamic occurs because positive experiences with international courts or arbitral panels enhance the perceived fairness of legal settlement methods and, therefore, the attractiveness of litigating again. The primary contribution of this dissertation involves theorizing and testing how static factors like geography combine with dynamics of settlement failure to explain when proposals for litigation become likely.

Hybrid logistic regressions employed on newly collected panel data covering territorial disputes between 1945 and 2015 are used to gauge the validity of my theoretical claims.