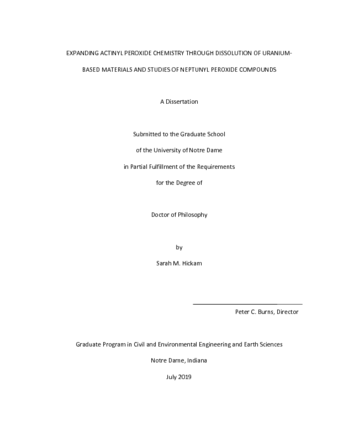 A growing subset of actinide compounds comprised of actinide oxide clusters are of interest in the processing and environmental transport of actinides. The most numerous of these reported structures are known as actinyl peroxide clusters: the first uranyl and neptunyl peroxide clusters were discovered in 2005, and in the years since, more than 70 unique structures have been described. Uranium peroxide chemistry has long been studied, as the interaction between uranium and peroxide is responsible for the only known peroxide-containing minerals, studtite and metastudtite, and hydrogen peroxide found early use in processing of uranium. Since the emergence of actinyl peroxide clusters, studies have suggested potential roles of the clusters in actinide transport and applications to nuclear processes; however, more information is needed about the controls on cluster formation to accurately predict or control actinide speciation.