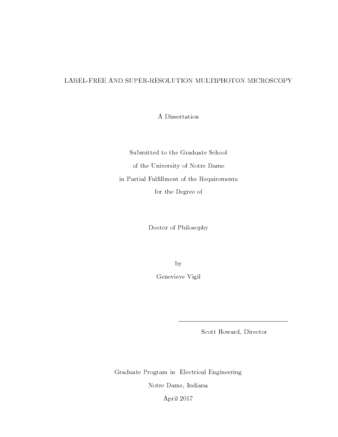 Multiphoton Microscopy (MPM) has provided the biomedical imaging field a methodology to perform high resolution, 3D, fluorescent imaging deeper and with less photodamage than other technologies, such as confocal microscopy. These features have proven MPM as an excellent tool for \ extit{in vivo} studies. However, most MPM studies use external probes or genetically modified animals thereby adding complexity and potentially interfering with the function of the system in question. Further, though MPM is capable of some of the highest resolution imaging at depth, it is bound by diffraction and scattering which limit resolution to sub-cellular levels and penetration depth to mm scales. This work attempts to circumvent the current limitations of MPM in two ways. First, to expand the utility of label free MPM by characterizing intrinsic signals which could be leveraged for meaningful studies of the rare and neglected disease, sickle cell disease (SCD). Secondly, a method is proposed to drive the resolving power and imaging depth of MPM further.

Towards these goals, studies of true \ extit{in situ} samples were used without external labels to perform clinically relevant investigations of SCD which could later be useful for \ extit{in vivo} monitoring in mouse models and therapy testing. Additionally, this work describes a nonlinear microscopy technique which leverages saturation effects for the development of a fluorescence microscopy technology capable of super-resolution imaging in thick, scattering tissue.

Imaging of intrinsic two photon excited fluorescence (TPEF) is performed on humanized SCD mouse model splenic tissue. Distinct morphological and spectral features associated with SCD are identified and discussed in terms of diagnostic relevance. Specifically, spectrally unique splenic iron-complex deposits are identified by MPM; this finding is supported by TPEF spectroscopy and object size to standard histopathological methods. Further, iron deposits are found at higher concentrations by all imaging methods employed here including MPM in diseased tissue than in healthy tissue and therefore may provide a useful optical biomarker related to the disease state. These newly characterized biomarkers allow for further investigations of SCD in live animals as a means to gain insight into the mechanisms impacting immune dysregulation and organ malfunction in SCD, which are currently not well understood.

Additionally, the photophysical properties of human SCD Hemoglobin (Hb) is characterized by multi-photon microscopy (MPM). The intrinsic TPEF signal associated with extracted hemoglobin was investigated and the solidified SCD variant (HbS) was found to demonstrate broad emission peaking around 510 nm when excited at 800 nm. MPM is used to dynamically induce and image HbS gelling by photolysis of deoxygenated HbS. For comparison, photolysis conditions were applied to a healthy variant of human hemoglobin (HbA) and found to remain in solution not forming fibers. The use of this signal to study the mechanism of and possible interventions for the HbS polymerization associated with the sickling of SCD red blood cells is discussed.