Church of Saint George, Lod: Interior, view of the nave from the southeast end 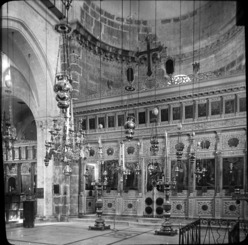 The major shrine for the fourth century martyr Saint George. The present Greek Orthodox church (1870) was built over the site of an early Christian church (destroyed) and incorporates a 15th century Byzantine basilica. It occupies the north end of the nave and left-hand aisle of the earlier church, from which there survive two apses that face north rather than east, as was customary. The Ottoman authorities stipulated in 1870 that part of the plot be made available for a mosque. Consequently the current Church of St. George incorporates only the northeast corner of the Byzantine basilica. The prayer hall of the adjacent mosque contains a column that once stood in the nave of the basilica. The church contains the sarcophagus of St George.