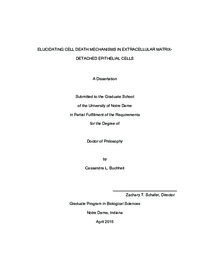 When mammary epithelial cells become detached from the extracellular matrix (ECM), they undergo programmed cell death. Over the past twenty years, our knowledge regarding various mechanisms utilized by cancerous epithelial cells to overcome ECM-detachment-induced death has grown. Elucidating the ways in which cancer cells overcome ECM-detachment-induced cell death is important for our understanding of the metastatic progression and for our ability to therapeutically eliminate these cells. Here, we describe a novel mechanism utilized by inflammatory breast cancer (IBC) cells to overcome ECM-detachment-induced apoptosis, or anoikis. IBC cells were shown to survive in ECM-detached conditions by regulating the intracellular localization of the proapoptotic protein, Bim-EL via protein interactions with Beclin-1 and LC8. These data are the first to describe how IBC cells can survive in an ECM-detached state.