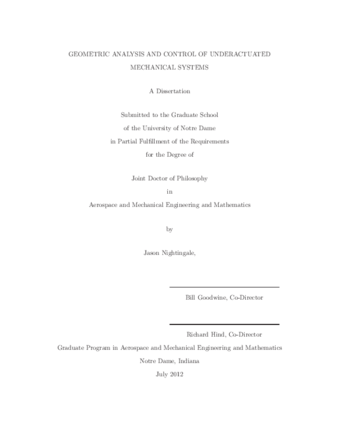 Geometric analysis and control of underactuated mechanical systems is a multidisciplinary field of study that overlaps diverse research areas in engineering and applied mathematics. These areas include differential geometry, geometric mechanics and nonlinear control theory. Many challenging applications exist such as robotics, autonomous aerospace and marine vehicles, multi-body systems, constrained systems and legged locomotion. These systems are characterized by the fact that one or more degrees of freedom are unactuated. The unactuated nature gives rise to many interesting control problems which require fundamental nonlinear approaches. This thesis contains contributions to modeling, analysis and algorithm design for underactuated mechanical systems.

We provide two novel differential geometric formulations of the nonlinear control models for underactuated mechanical systems. The key feature of each formulation is the partitioning of the equations of motion into those associated with the actuated and unactuated dynamics. Both formulations are constructed using control forces and the kinetic energy metric inherent in the classic problem formulation. Interestingly, each formulation gives rise to an intrinsic vector-valued symmetric bilinear form that can be associated with an underactuated mechanical control system.

The second formulation utilizes two linear connections. Specifically, we introduce the actuated and unactuated connections which provide a coordinate-invariant representation of the actuated and unactuated dynamics. We show that feedback linearization of the actuated dynamics gives rise to a control-affine system whose drift vector field is the geodesic spray of the unactuated connection. We call this control-affine system the geometric normal form for underactuated mechanical systems. The geometric normal form is the starting point for our reachability analysis and motion algorithms for mechanical systems underactuated by one.