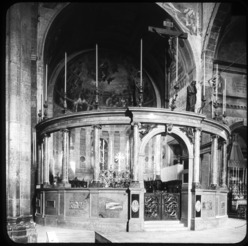 As part of the renovation of Verona Cathedral, which included a fresco scheme commissioned from Giulio Romano for the apse, Sanmicheli designed a semicircular choir (tornacoro) surrounded by a sumptuous marble screen with Ionic columns and an entrance arch (ca. 1534).

Dedicated to S Maria Matricolare, Verona Cathedral is important for its Romanesque sculpture, particularly the two porch-portals, the earlier on the south side attributed to Pelegrinus and the main façade portal signed by Nicholaus. Only the exterior walls up to the decorated cornice on the west, south and east sides belong to the Romanesque period, for the cathedral was enlarged in the 15th century in Gothic style. Renaissance elements were also added in the 16th century; notably the bell tower (ca. 1550) and main chapel by Michele Sanmicheli.