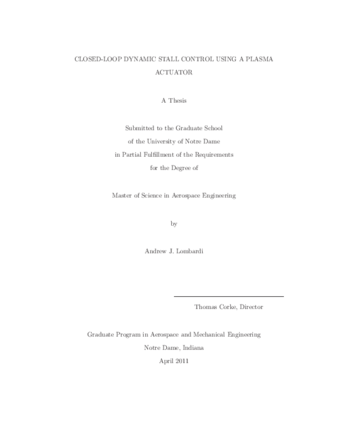 A closed-loop plasma actuated control scheme which relies on the ability to detect incipient flow separation is presented. It is known that the receptivity of the boundary layer increases with the onset of separation. The detection scheme therefore hinges on the ability to measure disturbances produced by the unsteady pulsing of a plasma actuator via an on-board pressure sensor and analog circuitry. The actuator introduces the disturbances into the flow at a low powered Sense State.' An on-board pressure sensor measures the real-time pressure signal at x/c = 0.08, which is then amplified and bandpass filtered around the actuator's pulsing frequency. An integrated circuit which measures the RMS of the signal serves as a means to measure the spectral energy at the pulsing frequency. When the signal reaches a sufficiently high value, set by an adjustable threshold, the actuator is triggered to a high-poweredControl State’ with more flow control authority. The method not only provides a precursor for flow separation, but also an indicator when conditions exist where active re-attachment control is no longer needed. This is demonstrated on a periodically oscillating airfoil which is pitched into light, medium, and deep dynamic stall.

Baseline, constant unsteady controlled, and closed-loop controlled schemes were studied for the three stall cases. Flow visualization and pressure measurements via on-board static pressure ports allowed for qualitative and quantitative measurements of the effect of the control scheme on the aerodynamic characteristics of the airfoil. The dynamic response of the tubing was improved through the use of the Wiener deconvolution method for reconstruction of pneumatically attenuated pressure signals.

The performance of the closed-loop scheme was evaluated by comparing the aerodynamic loading parameters to the baseline and constant unsteady controlled cases. In the light stall regime, the closed-loop case, which only operated in control mode 11% of the pitch cycle, reduced the maximum nose-down moment by 59% and improved the integrated lift coefficient by 12%. In the medium stall regime, schemes which operated the actuator in control mode 45% of the time provided similar improvements as the constant unsteady actuated case, while improving the moment and lift by 45% and 25%, respectively. No optimum control case was realized in the deep stall case, as the aerodynamic characteristics improved as a function of the amount of time the actuator was in control mode.