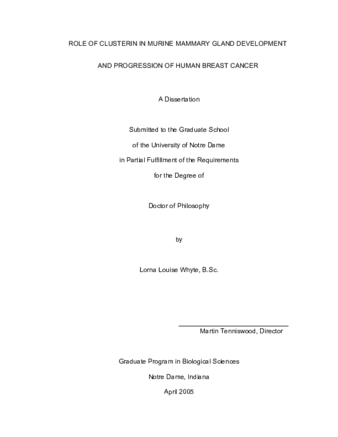 In several pathophysiological conditions such as cancer it is unclear whether the upregulation of clusterin is directly involved in the process of apoptotsis, whether its induction is secondary to stress and/or apoptosis, or whether the protein is induced as a protective or survival mechanism for the cell in response to stress. We have shown that the biogenesis of clusterin in MCF-7 breast cancer cells is significantly altered after treatment with TNF-a or the antiestrogen tamoxifen, leading to an upregulation of clusterin and the appearance of a non-glycosylated isoform of clusterin in the nucleus. Overexpression of the wild-type and nuclear isoforms of clusterin in vitro demonstrates a role for clusterin in the regulation of tumor cell growth. Clusterin appears to protect cells from apoptosis, and contributes to an invasive phenotype. In vivo work has established that clusterin overexpression increases tumor size, provides resistance to tamoxifen and facilitates the progression to a metastatic phenotype. All of these characteristics are common to the highly aggressive phenotype observed in late stage breast cancer patients.

These data are the first to clearly demonstrate that clusterin plays a role in pubertal mammary gland development and also helps to accelerate the progression of human breast cancer to a more invasive drug-resistant phenotype.