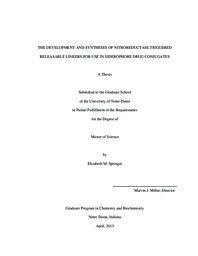 Bacterial resistance to antibiotics is becoming increasingly prevalent and dictates a desperate need for new therapies. A means of fighting this resistance is through the exploitation of microbial iron uptake. In order to obtain this necessary nutrient, bacteria synthesize a plethora of low molecular weight iron chelators known as siderophores. While drugs can be attached to these molecules and actively transported into cells in a “Trojan Horse” approach, activity is often lost when the target is present in the cytoplasm. As these drugs no longer reach their target or do not bind correctly, the incorporation of a releasable linker between the siderophore and antibiotic may restore activity and circumvent resistance due to decreased permeability of the bacterial outer membrane.
In this thesis, work towards the production of siderophore-drug-conjugates containing nitroreductase-triggered linkers is discussed. In chapter 2, the design and syntheses of linkers hypothesized to be reduced and cyclized by bacterial nitroreductase enzymes are described. Initially, test molecules were synthesized and reduced to demonstrate the feasibility of triggered drug release. After this proof of principle, a first generation linker was prepared, however a nitroreductase assay suggested that linkers with adjusted reduction potential might be necessary for drug release. Therefore, additional molecules were synthesized and the three prepared linkers were coupled to ciprofloxacin to form linker-drug conjugates. Biological testing was completed for several synthesized molecules and dinitro containing compounds showed moderate to strong activity against M. vaccae and M. tuberculosis.
In chapter 3 the production of a mixed-ligand siderophore and attempts at preparing siderophore-drug conjugates are described. Many conditions were employed unsuccessfully to couple the siderophore and the linker-drug conjugates. Currently, a new pathway is underway with the hope that it will be successful in the formation of siderophore-drug conjugates. Further studies are required to see if nitroreductase-triggered linkers in siderophore-drug conjugates will create effective antibacterial agents.