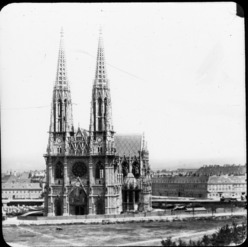 The church was one of the first buildings to be built on the Ringstrasse.

The church and name derive from the attempted assassination of Emperor Franz Joseph in 1853, which he survived. The church was to be a votive offering for the rescue of Franz Joseph and “a monument of patriotism and of devotion of the people to the Imperial House.” The church was one of the first buildings to be built on the Ringstraße. Ferstel won the international competition (1855) for the Votivkirche when he was only 26. It was also the first serious example of neo-Gothic architecture on an international level in Austria and marks a turning-point in the development of Viennese historicism.