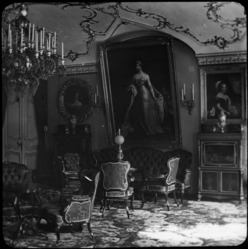 The drawing room on the ground floor of the Arsenal Block was noted for its plafond moulded gilt ornamentation, 18th-century German landscapes, gilded bronze and the mid-nineteenth-century set of furniture by Petersburg cabinet-makers.

In the spring of 1766 work began at Gatchina on a palace designed by Rinaldi for Count Grigory Grigoryevich Orlov (1734-1783); it was completed in 1781. The main block, of three-storeys and surmounted by towers on the side facing the park, was linked by open curving galleries to single-storey square service buildings. Reminiscent of Palladio’s country villas, the palace exemplifies the increasing influence of Neo-classicism on Rinaldi’s work. Some rooms, for example the White Hall and Oval Boudoir, have partially retained the decoration of Rinaldi’s day. The palace was a favorite of Catherine the Great, who purchased it from Orlov.