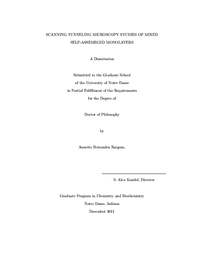 This thesis examines the formation of multicomponent self-assembled monolayers (SAMs) on the Au(111) surface using scanning tunneling microscopy. Two methods, sequential adsorption and coadsorption, are used to create these mixed SAMs. In the sequential adsorption experiments, a clean Au(111)-on-mica substrate is exposed to the first molecular species and then this adsorbate-covered sample is exposed to the second molecular species. Alternately, in the coadsorption experiments, a gold surface is exposed to both adsorbates simultaneously.

Exposing a coronene- or dithiocarbamate-covered surface to excess thiol in the vapor phase results in a drastic restructuring of the initial surface. This is primarily driven by the kinetics of the octanethiol monolayer formation process, but the extent to which this happens is dependent on the molecule-molecule and molecule-surface interactions of the adsorbate due to the initial coverage and order of the monolayer. An octanethiolate monolayer is also substantially modified when immersed in a solution containing dithiocarbamate (DTC). Defects in the octanethiol monolayer are prime sites for molecular exchange. A surplus of DTC in the solution drives substitution that can lead to the complete removal of thiol from the surface.

When a Au(111) surface is exposed to solutions containing both octanethiol and dithiocarbamate (DTC), both molecular species compete for available adsorption sites. At equal octanethiol-to-DTC ratios, molecular exchange hinders octanethiol monolayer formation. Higher octanethiol concentration in solution results in the incorporation of thiol into the resulting monolayer, with a strong dependence on the chain length of the DTC molecules.