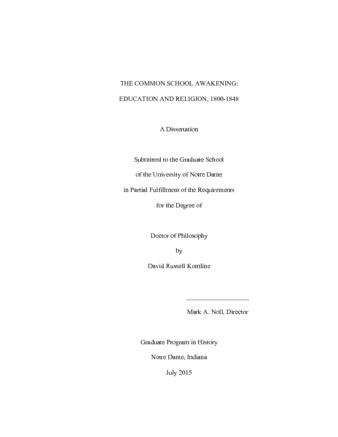 This dissertation reconsiders the origins of America’s public school system. By tracing the transatlantic travels of clergy-reformers, it argues that religion and international comparison played a defining role in the movement to systematize and professionalize American schools that lasted from approximately 1800 to 1848.Whereas typical educational scholarship begins with Horace Mann’s appointment as the Secretary of the Board of Education in 1837 and emphasizes the economic factors behind educational change, this dissertation demonstrates that Horace Mann’s reforms represent the culmination of a much longer movement, the chief aim of which was to Christianize the country through its schools.

The “Common School Awakening” had three phases.From about 1800 to about 1828, school reformers of various sorts experimented with different methods of schooling that they had imported from abroad.The Lancasterian method, developed by a Quaker in England, promised to bring education to the American masses.New approaches to teaching the deaf and the blind, imported especially from France, revolutionized teaching these populations.Even elite boarding schools looked to Prussia for models.The American reformers who used these innovations consistently framed their goals in terms of introducing their students to a broad, “nonsectarian” ChristianityIn the late 1820s, the same reformers who had earlier imported European teaching methods began to look to European educational models as ways to organize systems of government sponsored schools.The dissertation focuses on developments along these lines in Massachusetts and Ohio.Once again, religious reformers led the way in advocating these changes, rooting their appeals in the necessity of teaching citizens a nonsectarian Christianity in order to safeguard the republic.In the 1830s, this strategy achieved remarkable success.

By the early 1840s, however, such appeals had become increasingly problematic, as the idea of nonsectarian Christianity became less and less tenable.As a result, the dramatic reform of the 1830s came to a halt, occasionally even retreating.But whatever regression might have occurred, the Common School Awakening had a lasting effect.Systematization and professionalization were here to stay.