It's Easier to Blame: Emotion Avoidance in Victim-blame/derogation in Just World Theory 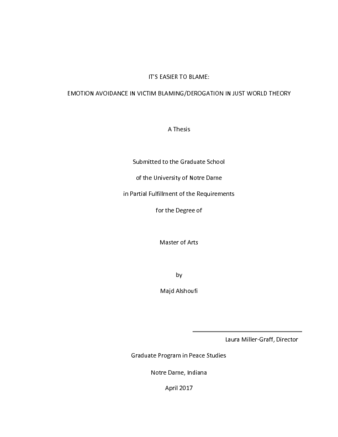 Our world is replete with instances of innocent suffering. Typically, people are expected to empathize with innocent victims, yet many resort to victim-blaming and derogation. According to Just World Theory, a belief in a just world drives the blaming and derogation of innocent victims. However, several lines of evidence point to an important role played by emotion avoidance. In this paper, I argue that emotion avoidance drives victim-blaming/derogation and the belief in a just world.

In chapter 1, I present a review of the research on just world theory. Next, and since emotive processes are essential to my inquiry, I present in Chapter 2 a review of the psychological literature on emotion and emotion avoidance. In Chapter 3, I explore evidence supporting a role for emotion avoidance and present my thesis in more detail. Finally, in Chapter 4, I examine the Syrian nonviolent movement of 2011 as a case study and present some implications of my hypothesis for sociopolitical movements.