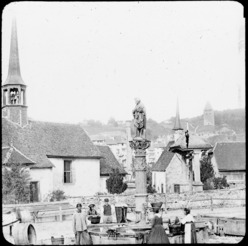 Fribourg has numerous 16th-century fountains. These great basins with columns in the middle, surmounted by biblical or allegorical figures, originally served as a source of drinkable water. They were made of limestone, but, due to shifting traffic patterns, most have been repositioned and replaced by copies. This fountain is in the original position and has a composite capital with the heads of Herod, Herodias, Salome, and St. John the Baptist, topped with a full figure of St. John the Baptist in medieval dress. The octagonal basin and its base of stone from Solothurn were redone in 1901 and the bronze spouts, the dolphins that hold them up, and the lions’ muzzles date from 1760.