The Roots of Islamic Political Philosophy: A Comparative Study of Al-Farabi's Virtuous City and Political Regime 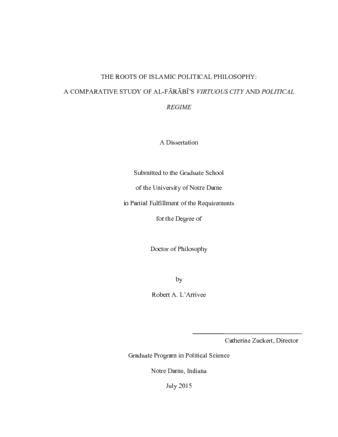 This dissertation compares and contrasts the Virtuous City and Political Regime, which are al-Fārābī’s two comprehensive works on political philosophy. Scholars have puzzled over why these works are similar and yet quite different in important respects. The dissertation argues that the texts are similar insofar as they investigate how the sensible and the intelligible bring theology, physics, and politics into an integrated whole. At each point the texts diverge, the Virtuous City presents the intelligible and the sensible as forming a harmonious whole, whereas the Political Regime questions this harmony.The reason for these divergences can be understood in light of each text’s purpose and intended audience.The Virtuous City contains a political teaching aimed at citizens that depicts the universe as governed by reason and promotes the freedom to pursue virtue in civic life. These opinions combat opinions that threaten the stability of the political community, such as materialism, the principle that might is right, and divine voluntarism. The Political Regime, however, when contrasted with the Virtuous City, questions whether we can actually know with philosophical certitude the principles that undergird the opinions meant for virtuous citizens. Thus, while the Virtuous City presents the sensible and the intelligible as a harmonic whole for the education of citizens, the Political Regime raises questions about the harmony of the whole for those who would embark on the philosophic life.