Sultan Ahmed I Mosque: Context view, seen from the area of the old Hippodrome 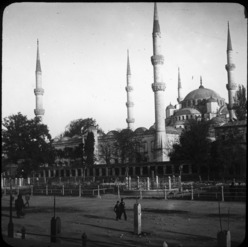 The mosque is popularly known as the Blue Mosque for the blue tiles adorning the walls of its interior. Like many other mosques, it also comprises a tomb of the founder, a madrasah and a hospice. When Ahmed I (reigned 1603-1617) ascended the throne, no imperial mosque had been built in the city for 44 years. The Sultan selected Mehmed Aga as chief architect and picked a site of immense symbolic significance, in the heart of the city on a site containing the ruins of the Byzantine Great Palace and facing the Hippodrome to the west. With its six minarets and its semi-domes cascading on four axes, the mosque represents the ultimate evolution of the imperial Ottoman mosque.