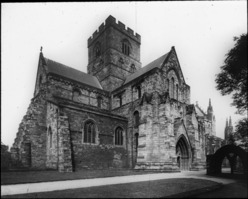 The seat of the Anglican Bishop of Carlisle. It is located in Carlisle, in Cumbria, North West England. It was founded as an Augustinian monastery and became a cathedral in 1133. Carlisle, because of heavy losses to its fabric, is the second smallest (after Oxford), of England’s ancient cathedrals. Its notable features include some fine figurative stone carving, a set of 15th century choir stalls and the largest window in the Flowing Decorated Gothic style in England (the East window).