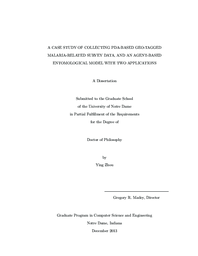 This work presents research for the Ph.D. degree in Computer Science and Engineering. It consists four distinct research parts.

The first one is presented as a complete case study (PGMS) that uses Geo-tagged PDAs to electronically collect malaria-related data in the field. It includes two major parts: the database designed for subsequent cross-sectional data analysis and the programs customized for the six study sites. The design principles adopted in PGMS can be applicable to a wide variety of data collection implementations. The experience we learnt from this case study can be also used by smart phone-based, tablet-based or netbook-based surveys.

Due to the Anopheles gambiae’s pivotal role in malaria transmission, modeling its population dynamics can assist in finding factors in the mosquito life cycle that can be targeted to decrease malaria transmission to a lower level. This dissertation presents an agent-based weather-aware entomological model of the complete Anopheles gambiae mosquito life cycle. The model tracks the development and the mortality rates of mosquitoes in eight distinct life stages: Egg, Larva, Pupa, ImmatureAdult, MateSeeking, BloodmealSeeking, BloodmealDigesting, and Gravid. It also models the transitions among these stages.

We also explore an application of this model, theoretically comparing the effectiveness of various hypothetical vector control interventions that target mosquitoes in different life stages and mosquitoes having different mosquito biological behavior applied separately and jointly on the reduction of mosquito abundance and malaria transmission capacity of a mosquito population.

This dissertation proposes another application of the above model that evaluates the late-life-acting insecticides and instant-acting insecticides in terms of malaria control and evolution-proof of insecticide resistance. We come to the similar conclusions presented by Read. And we also relaxed Read’s strict-timing working pattern of LLAs by allowing a LLA insecticide to target the mosquitoes in much more wide age range. Our simulation results show although the relaxed-timing LLAs’ performance of controlling mosquitoes and malaria transmission is less effectively than the strict-timing LLAs, they still work more efficiently than the traditional instant insecticides.