Mar Saba: View from the river bed, looking up at the entire cliff face and settlement 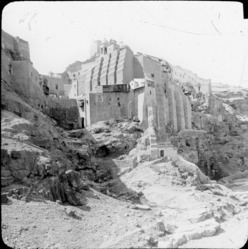 A Greek Orthodox monastery overlooking the Kidron Valley in the West Bank east of Bethlehem. The traditional date for the founding of the monastery by Saint Sabas [Sabbas] of Cappadocia is the year 483 and today houses around 20 monks. It is considered to be one of the oldest inhabited monasteries in the world. The monastery holds the relics of St. Sabbas the Sanctified. Mar Saba was also the home of St. John of Damascus (676-749), a key religious figure in the Iconoclastic Controversy. The monastery is important in the historical development of the liturgy of the Orthodox Church in that the monastic Typicon (manner of celebrating worship services) of Saint Sabas became the standard throughout the Eastern Orthodox Church and those Eastern Catholic Churches which follow the Byzantine Rite.