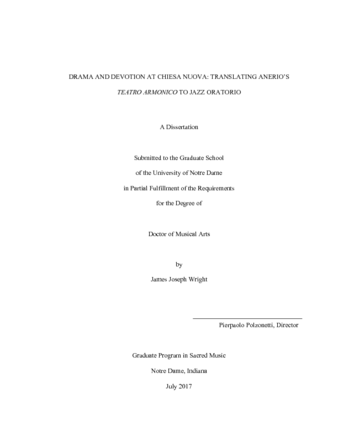 At the heart of this thesis is my conviction that both the Second Vatican Council and the Council of Trent had a general effect of promoting innovative liturgical practices rooted in the Catholic tradition. Giovanni Francesco Anerio’s (1567-1630) experiments, as a part of St. Philip Neri’s oratorio vespertino services in early seventeenth-century Rome, illustrate his understanding and incorporation of the ideals of Trent through his composition and performance of Teatro armonico spirituale di madrigali. Likewise, in this time after Vatican II, by mirroring Anerio’s work and translating his practice into a language that is accessible to modern audiences and rooted in the African-American tradition, I have created jazz oratorios with a similar objective. In these works, I am following the examples of jazz musicians Duke Ellington, Mary Lou Williams, and Dave Brubeck, who all bridged jazz and sacred music in the twentieth century. This project is a study of Anerio’s Teatro in its original context but aiming at a recreation of the ritual function of his music in our time in a style that borrows from jazz and other musics. To this end, this thesis presents a study of Anerio in his historical context, a study of influential examples of jazz sacred music, as well as an analysis of the cultural politics relative to the music of Counter-Reformation Rome and Post-Vatican II America. This study is then related to contemporary sacred music, including a discussion of theories of cultural translation that are relevant to the creative component of my project. The latter includes critical editions of a selection of works from Anerio’s Teatro, as well as five newly composed oratorios that are directly based on the subject matter, poetry, and form that Anerio used for his madrigals. The ultimate goal of this project is to embolden a renewal of devotional practice in the contemporary Church.