Versailles: Royal Chapel: View of the Baroque apse of the chapel, Royal courtyard 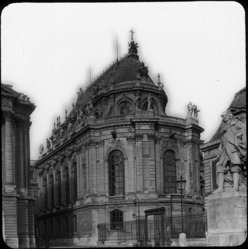