Reims Cathedral: Sculptural fragment on display in the cathedral 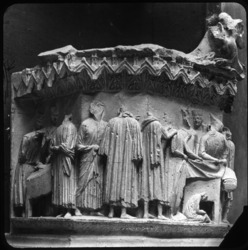 This may be the damaged north transept trumeau socle; the relief probably relates to the local legend of a merchant who sold a false measure of cloth to his clients, was accused by his peers and finally repented before a statue of the Virgin and Child.