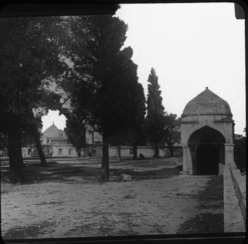 Widely recognized as one of the premier monuments of Ottoman architecture, the mosque was built above the Golden Horn on a hilltop site. In 1557 Sinan completed an immense külliye on 15 acres (over 7 ha, 250 x 350 m) of the grounds of the old palace in the centre of Istanbul for Süleyman (reigned 1520-1566). In addition to the congregational mosque and its two mausolea, the main buildings include four madrasas, a preparatory school, a medical college, a school for Hadith, a hospital, a caravanserai, a public kitchen and a bath. Rows of small shops and coffee-houses were set in the undercrofts and vaults, and there were stables and a park for caravans. No other complex of this magnitude (it had more than 525 cupolas) was ever built again.