Fontaines Place André Malraux: Overall view of one of the fountains 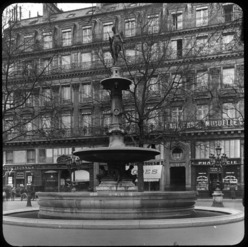 The square is now named Place André Malraux, instead of Place du Théatre-Française. The other fountain is topped by a sea nymph.

[As a colleague of Hausmann, Davioud was responsible (1855-1867) for the lodges, chalets, cafés, kiosks, wrought-iron grilles and fountains in the Bois de Boulogne, the Bois de Vincennes and the parks of Montsouris, Monceau and the Buttes-Chaumont, as well as numerous squares. from Grove] Place du Théatre-Française was created in 1867; Davioud planned two fountains. Each has a circular stone basin; a base of gray marble with four seated children in bronze; a bronze vasque; a piédouche, or column, of white marble with medalions with the seal of city, and water spouting from the top; and, at the top of the piédouche, a river nymph at the top of the fountain nearest the theater, and a sea nymph at the top of the second fountain. The sea nymph sculpture is by Carrier-Belleuse and the four children at the base by Louis-Adolphe Eude; the river nymph was made by Mathurin Moreau, and the four children at the base by Charles Gauthier.