Opting Out: How Political Context, Political Ideology, and Individualistic Parenting Contribute to Vaccine Refusal in California, 2000-2015 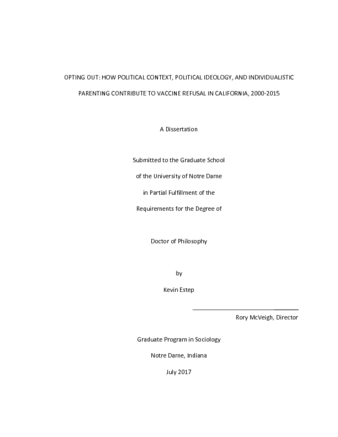 Vaccinations are among the most important advancements in modern medical history, yet a growing proportion of parents are choosing to opt out of routine immunizations for their children. This dissertation addresses three important puzzles related to vaccine refusal: How can we explain the sharp increase in vaccine refusals over the past 15 years? Why has the issue of compulsory vaccinations become politicized? And why are vaccine exemptions overwhelmingly clustered in particular places? The analysis focuses on the state of California from 2000 to 2015. I give particular attention to the role of party politics and political orientation. I conclude that the combination of increased residential segregation by political orientation, higher rates of PBEs in Republican contexts, and electoral pressures on Republican lawmakers to relax compulsory vaccination laws could lead to dangerously low vaccination rates in communities where most residents share neoliberal conservative values. I also develop and test a theory about how non-politicized issues become linked to political ideology and party agendas. Specifically, I find that conservatives living in “hostile” territory—i.e., where their neighbors tend to be more liberal—are especially likely to politicize the issue of compulsory vaccinations. Finally, this research sheds light on the most troubling aspect of this issue, namely, that vaccine exemptions are overwhelmingly concentrated in particular schools and communities. I argue that “pockets of homogeneity” in the midst of more socioeconomically integrated communities attract parents that think in terms of “opt-out individualism.” These pockets then reinforce the tendency to opt out of vaccines by reducing the social stigma associated with vaccine refusal and by giving parents a false sense of protection from disease.