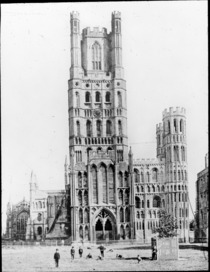 Before the Norman Conquest of 1066 Ely was one of the richest English monasteries. In 1109 Ely was made an episcopal see, and the endowments were divided between the bishop and the monastery. The monastery was dissolved in 1539, and the cathedral church refounded in 1541, when the dedication to SS Etheldreda and Peter was changed to the Holy and Undivided Trinity. Ely Cathedral has important Romanesque, High Gothic and Decorated architecture, while the later medieval period is represented principally by chantry chapels. Major restorations took place in the mid-18th century under James Essex and in the mid-19th century under Sir George Gilbert Scott.