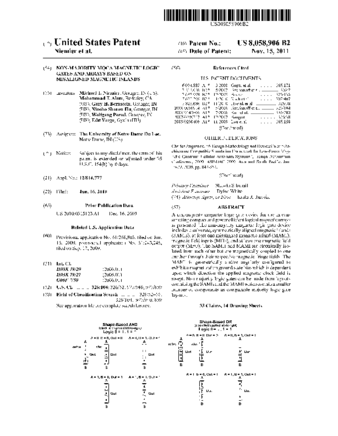 A non-majority magnetic logic gate device for use in constructing compact and power efficient logical magnetic arrays is presented. The non-majority magnetic logic gate device includes a substrate, symmetrically aligned magnetic islands (SAMIs), at least one misaligned magnetic island (MAMI), magnetic field inputs (MFIs), and at least one magnetic field output (MFO). The SAMIs and MAMI are electrically isolated from each other but are magnetically coupled to one another through their respective magnetic fringe fields. The MAMI is geometrically and/or angularly configured to exhibit a magnetization ground state bias which is dependent upon which direction the applied magnetic clock field is swept. Non-majority logic gates can be made from layouts containing the SAMIs and the MAMI which contain a smaller number of components as comparable majority logic gate layouts.