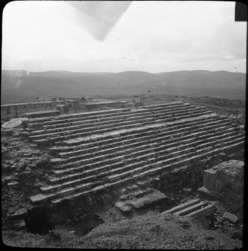 The ancient Samaria, founded in 887 BCE by King Omri of Israel. The holy city of Samaritans (known in the Bible as Shomeron); influenced by culture of Phoenicia; strengthened by Ahab, but idolatry and corruption led to overthrow by Shalmaneser V and Sargon II in 724-721 BCE. Destroyed by John Hyrcanus in 107 BCE; rebuilt as Sebaste (named in honor of the Emperor Augustus) by Herod the Great of Judaea, who built the Temple of Augustus, ca. 27 BCE, which partly overlays the former Israelite royal quarter on the highest hill. The temple itself measured ca. 35 x 24 m and was approached through a spacious forecourt on the south side. This was constructed over an artificial platform supported by vaulted corridors. A wide flight of steps led up from the court to the temple, which stood on a podium, 4.5 m high. The temple was destroyed, but was rebuilt by Septimius Severus, who added an altar in the forecourt and a new flight of steps to extend the earlier ones.