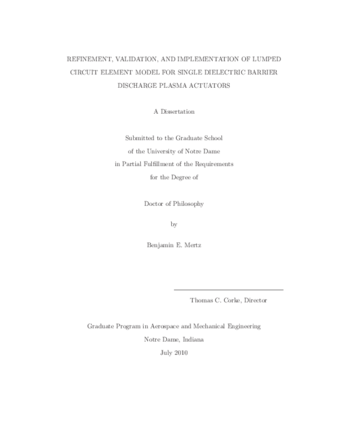 Single dielectric barrier discharge (SDBD) plasma actuators have been applied to a wide variety of aerodynamic flow control applications ranging from stall suppression of airfoils at high angles of attack to reducing tip leakage in jet engine turbine blades. With increased interest in applying plasma actuators to various engineering problems comes the need for an efficient model of the actuators that can be used in a CFD simulation. Prior to the current work, a model was developed that captured many of the spatial and temporal dynamics of the actuator by using circuits consisting of resistors and capacitors to model the plasma and dielectric material. In the current work, this model was refined by casting the governing equations in terms of a generalized coordinate system so that it can be applied to curved surfaces, the grid dependence of the model was eliminated, and the method of applying this model as a boundary condition to the electrostatic equations to calculate the body forces generated by the actuator was studied. This new formulation of the lumped circuit element model was then validated against various experimental observations including force vector orientation needed to produce observed induced flow, the scaling of the force with input voltage, and the directivity patterns and pressure time-series from acoustic measurements. The model was also implemented in a flow solver for the case of an impulsively started actuator on a flat plate and compared to experimental data found in literature. Finally, the utility of the model was demonstrated by simulating the use of actuators for flow control of the flow over a circular cylinder and a modified blunt trailing edge wind turbine blade.