Power and Purpose: The Durable Settlement of Self-Determination Conflicts 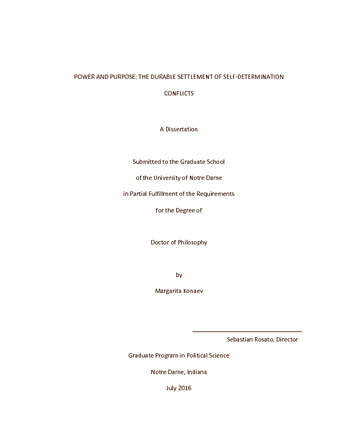 Why does peace fail? More specifically, why do some governments and ethnonational groups striving for greater autonomy or independence revert to violence, while others manage to avoid repeat civil conflicts? From Nigeria and the Sudan to India and Sri Lanka, from Azerbaijan and Iraq to Bosnia and the Ukraine, civil wars fought over national self-determination account for some of the deadliest conflicts in recent history. Today, these disputes constitute the most common form of state-based armed conflict. Despite an unprecedented international commitment to building peace and fostering democracy in ethnically divided societies, sustainable solutions remain elusive. In many countries beleaguered by contested demands for self-determination, recurrent conflicts have become the norm.

In this dissertation, I develop a theory about how power as foretold by demographics and influenced by geography shapes war and peace. Demographic factors such as the relative size of the ethnonational group’s population and its territorial settlement patterns always affect battlefield dynamics, often inhibit decisive military outcomes, and sometimes altogether prohibit efforts to negotiate and implement a peaceful resolution to the conflict. My central argument is that the demographic balance of power between the conflicting sides can largely explain why peace endures after the cessation of hostilities in some conflicts but not in others. Conflicts that pit governments against rebels fighting for the self-determination of relatively large ethnonational groups, and especially those groups that represent the largest minority in the country are more susceptible to repeated cycles of large-scale violence and are more difficult to successfully end in a negotiated agreement.

I test this argument utilizing a multi-method research design which combines a quantitative study of 103 violent national self-determination movements between 1946 and 2012 with a set of case studies that trace the path to war and the search for peace in the Israeli-Palestinian and the Russo-Chechen conflicts. This dissertation offers an interdisciplinary explanation that draws insights from international relations, political demography, and military science for what has predominantly been approached as a question of faulty institutional design or irreconcilable ethnic divisions. The findings have important policy implications for intrastate conflict resolution and international security.