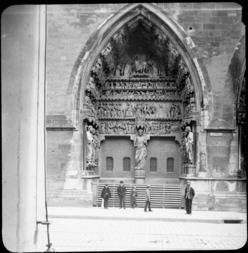 The left, Last Judgment, portal originally gave access to the eastern walk of the cloister and probably dates from ca. 1225-1230. The tympanum shows Christ the Judge, displaying his wounds and flanked by the kneeling figures of the Virgin and St John the Baptist and angels holding Instruments of the Passion. The jamb figures, representing six Apostles, flank the trumeau statue of Christ.