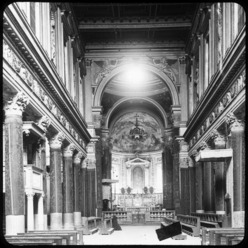 The current church was rebuilt in 1395-1401 with the addition of side chapels and a magnificent Gothic facade, which can still be seen in a sketch by Domenico Morone, which is preserved in the Palazzo Ducale of the city. After another fire in 1545, Giulio Romano remade the interior but saved the facade. Guilio’s project included the rebuilding of the choir and restructuring of the nave, enlarging it to five aisles. Rows of splendid Corinthian columns, finely detailed and made of Veronese marble, define both the central nave and the side aisles. The facade was however replaced in 1756-1761 by the current one in the Baroque style, done in Carrara marble by Niccolò Baschieri, a military engineer from Rome. Of the earlier exterior, all that remains is the right side, in brick with Gothic details including small turrets; this adjoins the Gothic bell tower.