Cádiz Cathedral: Overall view, the rear of the cathedral, remains of the oldest building 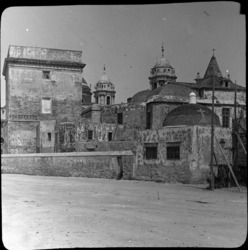 The church sits on the site of an older cathedral, completed in 1260. In 1596 Cádiz was destroyed by the 2nd Earl of Essex, leading to its almost total rebuilding on a grid plan that has been partly maintained; the first major work was to rebuild the cathedral (the Catedral Vieja, dedicated to La Santa Cruz), which was completed in 1602. During the period of prosperity that followed, a new cathedral (the Catedral Nueva) was begun in the High Baroque style in 1722 by Vicente Acero (died 1738) (completed 1860 with some Neoclassical elements). It has a yellow tiled dome, which is a Moorish element.