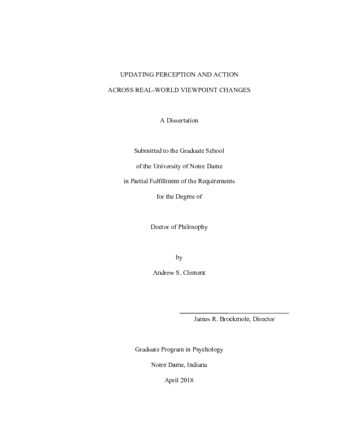 A growing body of research suggests that performing actions can distort the perception of size, distance, and other visual information. Distance perception can also be influenced by a variety of factors, including the movement of an observer. While this movement has consequences for how spatial knowledge is updated at new viewpoints, it is unclear whether action-specific distortions are similarly influenced by movement. On one hand, these distortions may no longer be observed once observers have moved to new viewpoints. On the other hand, these distortions may persist in visual perception, even after observers have moved to new viewpoints. To distinguish between these two possibilities, the present study assessed whether perception and action are updated across real-world viewpoint changes. Participants viewed an object that was projected onto a table, then reached for it with their index finger or a reach-extending tool. After reaching for the object, participants remained stationary or moved to a new viewpoint. Participants then estimated the object’s distance from their current viewpoint. When participants remained stationary, using a reach-extending tool led them to report shorter distance estimates. However, when participants moved to a new viewpoint, these distortions were no longer observed. These effects were not due to viewpoint dependence, and occurred for different types of movement, including rotations of the body and minimal changes in viewpoint. Moreover, these effects were observed even when participants moved on only a subset of trials. Together, these findings suggest that visual perception is continuously updated as observers move throughout the environment.