Monotheism and the Paradox of Intolerance: The Refusal to Divinize Victims and the Mosaic Distinction 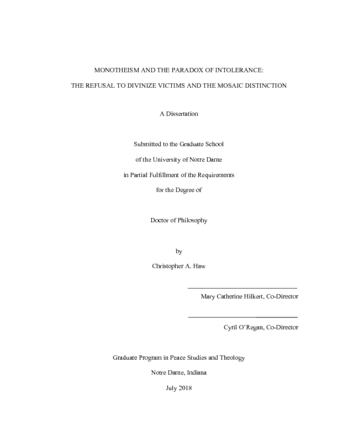 In a shrinking and globalizing world, with many conflicts stemming from religious or ideological differences, how are we to regard monotheism’s potential for inspiring violent absolutism? Discussions of monotheism’s political consequences often emphasize either its “intolerance” of other gods and religions as a source of bigotry and conflict, on the one hand, or emphasize monotheism as a source of pacific, universalistic, transcendent tolerance on the other. But both approaches fail to give monotheism’s “intolerance” its due. I argue that monotheism’s intolerance opens up historic potentials that are both enlightening and dangerous: it dissolved the ancient link between God and the political sphere, helped us see past the distortions of divinized politics, and deepened concern for the victims of politics—while it nonetheless makes possible a uniquely absolutist, violence. By comparison, polytheistic “tolerance” does not necessarily make for a liberating vision of inclusion and diversity. To argue this, I construct an account of monotheism’s intolerance—as a “refusal to divinize victims” and a prohibition of representing the Absolute—and its relevance to pluralistic coexistence today. This includes critically weaving together the mimetic theory of René Girard, the monotheistic scholarship of Jan Assmann et al, and the social theory of Chantal Mouffe, treating their ideas as mutually illuminating.