On the Effect of Diffusion on Gaseous Detonation 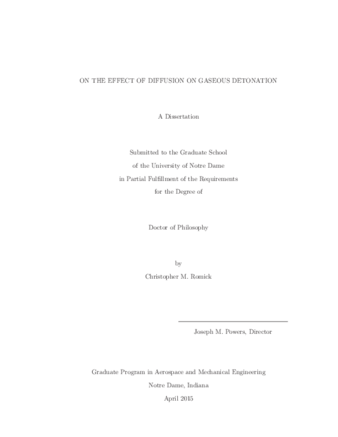 The development and propagation of detonations is examined in the presence of diffusive processes. The difference between the inviscid and viscous models is quantitatively evaluated for one-dimensional propagating detonations. First, an investigation of viscous effects is performed on one-dimensional pulsating unsupported Chapman-Jouguet detonations using a simplified one step kinetics model for various activation energies. The inclusion of viscosity in the model, delays instability to a higher activation energy and enlarges the activation energy range of the bifurcation process that leads to chaotic detonation. Then using detailed kinetics and full multi-component diffusion, a set of one-dimensional piston-driven hydrogen-air detonations is evaluated. The diffusive processes alter the behavior near the stability point, but as the intrinsic instability grows in strength, the viscous effects diminish. Harmonic analysis is used to illustrate how the frequency spectra of the pulsations evolve. Lastly, a study of the acceleration of several symmetric laminar flames in narrow two-dimensional channels is performed. Adiabatic no-slip walls contribute to the acceleration of the flame towards detonation by trapping the thermal energy that the boundary layer has converted from the mechanical energy of the propagating acoustic waves emanating from the flame. Below a threshold in channel width, viscous resistance becomes dominant and can significantly extend the time to the exponential pressure growth and acceleration of the flame. Increasing the percentage of diluent in the flame reduces the rate at which the flame accelerates and alters the width at which viscous resistance dominates. Ambient temperature isothermal walls retard the propagation of the flame in comparison to adiabatic walls at early times with the risk of extinction.